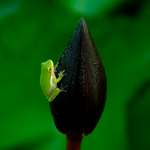 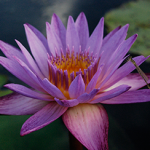 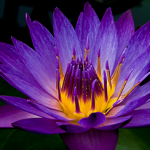 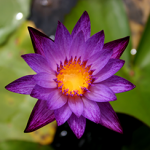 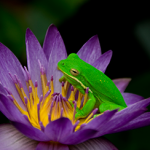 How do you cope with the death of a child? Rolf and Anita Nelson of Nelson Water Gardens & Nursery in Katy, Texas, chose to commemorate the life of one cancer victim by giving a tropical waterlily the 14 year old girl’s name: Lindsey Woods. When the Nelson’s daughter, Anne, was born in September 1985, she had a ready-made playgroup with next door neighbors Lindsey Woods and her fraternal twin sister, Terra, who were born nine months before. The three girls grew up together, spending endless hours in the pool, baking cookies, riding bikes, having tea parties, and otherwise whiling away weekends and summers. Everything changed when Lindsey started having severe headaches and passing out in 1994. The diagnosis everyone dreads was pronounced. Lindsey underwent chemotherapy, radiation therapy, and experimental treatments. For a while, it seemed she’d beat it, but two summers later, the cancer returned. During Lindsey’s illness, Mike Swize, head propagator at Nelson Water Gardens & Nursery, had noticed an unusual lily growing in a ‘Panama Pacific’ tank. The tropical lily was deep purple with black sepals. Its leaves which stay closely gathered around the flower, had an interesting pattern of variegation. Mike decided to try propagating it. As Mike watched the new lily’s progress, he began to think about naming it for Lindsey. He discussed the possibility with his family, who were also friends of the Woods family. He also ran the idea past the Nelson’s. “Growing a new plant is a chancy thing,” Anita notes. Sometimes the plant is not suitable and is sometimes lost.” For these reasons, no one mentioned the idea to Lindsey or her family. So many things about the idea seemed right though. Mike had discovered the plant just as Lindsey’s illness began. The flower was purple, Lindsey’s favorite color. Everyone held their breath and hoped the flower would flourish even as the little girl’s health slipped away. In 1998, Lindsey made the decision not to pursue further treatment. “Can you imagine someone that young making a decision like that?” Anita Nelson asks. “She had very strong faith. She really was an amazing child.” Lindsey died April 21, 1999. The following year, Nelson Water Gardens introduced ‘Lindsey Woods,’ contributing $20 from the sale of every plant to Texas Childrens Hospital. “Cancer has touched so many people,” Anita notes. “You don’t even realize it until you get involved with something like this. To date, Nelson Water Gardens has contributed $69,692 from the sale of ‘Lindsey Woods’ Waterlilies to Texas Children’s Hospital. Anita thinks the fund-raising aspect of this project would have special appeal to Lindsey. “She was very conscious of how much her treatments and illness were costing her family. She never voiced her concerns but when the local church put on a fund-raiser to help the family. Lindsey was ecstatic,” Anita says. Lindsey died never knowing that we’d named the lily for her, but I know she is an angel now and that she knows.” Anita says, “Lindsey’s greatest fear was that she would be forgotten. Little did she know she’d live on through a waterlily.”

You Can Find Us